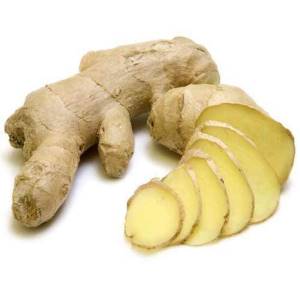 Fresh ginger has something addictive with its refreshing and warming effect at the same time. In addition, ginger is very healthy and is also good for your immune system.  That’s why we like to always have some on hand.

But what is the best way to peel ginger? And how do you prevent hard pieces of dried ginger from being left in your fridge?

Ginger often does not get used up in one go. Fortunately, fresh ginger, if stored correctly, can be stored for a while.

You really don’t need more than a spoon, a bowl, and some water or vodka.

How to peel ginger

Ginger is a delicious and versatile seasoning. That makes it an indispensable ingredient in your kitchen. It’s just a little tricky to peel as there are many nooks and crannies on the ginger root, so you can quickly cut off too much.

Although most people peel ginger with a small knife, it is best to use a small spoon. Scrape off the skin with the round side of a spoon. You will see that it goes faster than with a knife. It may sound a bit crazy but works great.

How to grate ginger

You can grate ginger with a regular block grater, but then the grater is difficult to clean afterward. The holes of an ordinary grater quickly become clogged.

You may want to consider investing in a grater designed for grating ginger. For example, you can use porcelain ginger graters or micro-plane ginger graters.

Next, you need to grab a container to hold the grated ginger and decide how much ginger you need.

You can grate the whole piece of ginger if you want, but you only need a little bit for most dishes. In that case, first cut a piece of the ginger root and grate only that piece.

Scrape the ginger along the grater. Do this against the cutting edges of the grater. Drop the grated ginger into the container.

Remove any remaining pieces of ginger from the bottom of the grater.

How to cut ginger 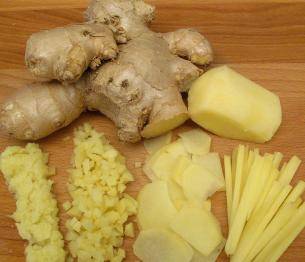 To cut the ginger into small cubes, first cut the peeled ginger so that you get round slices. Hold one or two of these slices and then cut into thin strips about the thickness of a match. Then cut them vertically into many small cubes.

Randomly chop these cubes a few times if you want smaller pieces.

To cut the ginger into strips, follow the first step above. Some people prefer long strips rather than round slices. You can then cut and dice these longer pieces into “matches”.

This method is better if you don’t mind having larger pieces of ginger in your dish, for example in a stir fry.

Read More: How to use ginger root in smoothies

How to mince ginger

Chop the ginger using the methods above and then crush it with the flat of a knife. This method works best with a large, heavy knife such as a cleaver, but a large knife with a flat blade will also work.

If you don’t need a whole ginger root, but still want to use the food processor, you can also chop the ginger and then store it in the freezer. If you cook with frozen ginger, you don’t even need to thaw it – the frozen water evaporates very quickly, so you have usable ginger.

How to store ginger

Peeled and prepared ginger should preferably be stored in the fridge.

When you’re done peeling, it’s best to put the pieces of ginger you’re not using in a bowl of water in the fridge. This prevents the ginger from drying out. It is important that you change the water daily.

This storage method is especially useful if you use ginger almost daily. You can also choose to dip the ginger with vodka instead of water. The ginger can then be kept even longer, but it tastes slightly different.

Another option to store fresh ginger is to put it unpeeled in a plastic bag – without air – in the vegetable drawer. If you want to keep t even fresher then you also roll the fresh ginger in kitchen paper before you put it in the plastic bag.

How long can you keep fresh ginger? Unpeeled and well packed, the ginger is good for about three weeks in the refrigerator. When it has been peeled and cut, it will last about 10 days in a bowl of water.

Can you freeze ginger?

You can also freeze a peeled ginger root in a freezer bag. You can then easily grate something from it, for example in your curry. After grating, put the frozen ginger root back in the freezer in time.

How long can you keep fresh ginger in the freezer? For about three months.

Read More: How to freeze spinach for smoothies

Can you store dried ginger?

You can also dry ginger and then store it. Grate the ginger and place it on a piece of kitchen paper in a dark, well-ventilated area. Let the ginger dry for 4 days. Place the dried ginger in a sealable jar.

How long can you keep dried ginger in a sealed jar? Up to 1 year.

Do I need to peel ginger?

Although most people prefer to peel ginger, you don’t actually need to. You can save yourself a lot of time and hassle by just leaving the peel on the ginger and chopping or grating it.

You will find endless tips online to make it easier to peel ginger, from putting it in the freezer to hollowing it out with a spoon. These are all great tips, but it doesn’t hurt to leave the peel on. In fact, many chefs save themselves the trouble and don’t peel ginger.

“I never peel ginger,” says Molly Baz of the famous cooking channel Bon Appétit. “I don’t understand why people peel ginger. Someone decided one day that you have to remove the skin and then everyone wasted their time fiddling with a spoon. While you can safely eat it without noticing the peel. You can eat it normally unless the ginger is very old and bony. But then you shouldn’t be using that ginger at all.”

Another great advantage of eating ginger with the peel and all: you avoid a lot of wastage. If you’re concerned about bacteria, you can rinse the ginger like you would an apple, for example. That said, always use fresh ginger.

Ginger itself has a strong taste, which in addition to being fresh can also be called a bit spicy. The taste of ginger powder is somewhat stronger than that of the fresh variant, so you need to use less than usual in the preparation.

When you cook fresh ginger in thin slices (for example with rice), it will lose its fresh taste, but a strong aromatic taste will return.

This chicken recipe is a great way to try cooking with ginger. It has a delicious and warm flavor and is simple to make.

Cut the chicken breasts into thin strips and place them in a bowl. Peel the ginger and cut it into very small dice, thinly slice the spring onion and mix with the chicken. Add the sesame oil, soy sauce, and some salt and pepper.

Let it marinate for at least half an hour.

Peel the mangoes and remove the flesh from the pit. Cut the flesh into strips the same size as the chicken.

Heat the oil in a wok or large frying pan. Quickly stir-fry the chicken strips over high heat (5 minutes). Heat the mango strips in the microwave for a few minutes and mix with the chicken.

Preparation for the sauce

Put the tomato puree with the water in a saucepan and simmer gently for a few minutes with the peeled and grated fresh ginger, sambal, and sugar. Cut the candied ginger balls into small pieces and add them, along with the vinegar and ginger syrup. Let it simmer for a few more minutes and serve.

How to peel ginger: final thoughts

As you can see, fresh ginger root is a very important and versatile kitchen ingredient. There are multiple ways to use ginger in cooking, and in this article, I have gone over how to peel ginger root, as well as how to store ginger, how to chop ginger, and how to mince ginger. The chicken with ginger recipe that I shared is an excellent introduction to ginger, you must try it!