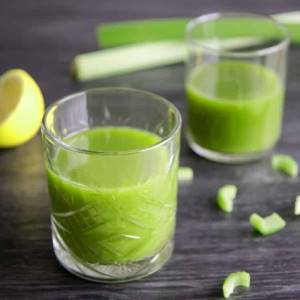 We’ve been seeing it everywhere for a few months now; on Instagram, health blogs & in the juice shops: celery juice. Despite the critics, many swear by the wonders of this juice. We have listed the benefits of celery juice, criticisms, and three upgraded recipes of this power juice for you!

When did celery get so popular?

In recent months, more and more questions have come in about celery juice. Celery juices are all the rage. It is touted as an elixir of life with miraculous powers. In many places, celery is only available to order because celery supporters buy them en masse.

Instagram is now overflowing with people sharing their celery juice with the world. What is going on here? How did this juice get so popular? Is celery juice really that healthy?

Read More: How to use a Ninja Blender for Juicing: Simple 5 Step Guide

The unstoppable popularity of celery juice seems to have taken hold mainly because the speaker and writer Anthony William pays a lot of attention to it. Anthony is very popular with celebrities and those seeking ultimate health. Many celebrities and Hollywood stars believe his claims about the health properties of celery.

He claims to be a clairvoyant who can diagnose diseases in people and knows which foods can cure them. Anthony has written several books, including the bestselling Medical.

According to him, celery juice is recommended for the Epstein-Barr virus (EBV), migraines, digestive problems, skin rashes, fatigue, a stuffy head, and hundreds of other complaints. Very interesting, but what has science researched about this?

Read More: 23 juice recipes that are easy to make

The benefits of celery juice according to science

Packed with nutrients – The juice of celery contains only 18 kilocalories per 100 grams, while there are many micronutrients in return. It is high in vitamin K, folic acid, vitamin A and potassium. Almost all minerals are represented. This allows celery juice to have a hydrating effect.

Rich in Apigenin – Celery is known to be rich in apigenin. According to researchers, this may work against inflammation in the stomach, as well as against stomach cancer.

Rich in Antioxidants – Celery contains many antioxidants, including flavonoids, which on their own are also associated with anti-cancer properties. Researchers found in an animal study that celery juice may protect against the damaging effects of oxidative stress in certain cancer drugs.

May inhibit inflammation – Celery appears to contain the substance apium. This compound appears to have anti-inflammatory properties according to preliminary studies.

May Improve Fertility – Especially in Men. A recent review states that celery can protect the male reproductive system from damage and promote healthy sperm formation.

May Affect Blood Glucose Levels – A recent study found that an extract of celery leaf is able to improve blood glucose levels both before and after meals. The insulin values ​​did not differ.

May Improve Blood Pressure – In exploratory animal studies, scientists found that celery extract can improve not only systolic blood pressure but also LDL and triglyceride levels.

Read More: How to make beet juice in a blender

The above studies are studies of moderate quality. More research is needed for definitively proven health effects. Unfortunately, the celery industry doesn’t have a multi-billion dollar investor, so these studies are unlikely to happen anytime soon.

Good studies are very expensive and difficult to set up. Because nature cannot be patented, few investors are willing to put money on the table. The situation is different with the pharmaceutical industry; they can recoup their investments by means of patents, which give them the exclusive right to produce certain medicines.

Read More: How to make celery juice with NutriBullet

How much celery juice and when?

Anthony recommends drinking 16 ounces of fresh celery juice in the morning on an empty stomach. That corresponds to 473 ml. Preferably pure, but if you do not appreciate the taste, adding a little cucumber or apple is allowed, provided this is gradually reduced.

Celery juice is most medicinal when it is completely pure. The juice is said to have a more positive effect on health than eating celery itself. He says he has seen thousands of people healed by drinking this juice.

There are plenty of personal success stories on the internet, but these fall under the heading of anecdotal evidence. Anthony gives a tip that it is best to make the juice fresh yourself with a horizontal slow juicer. Organic celery would be preferable, but is certainly not a necessity, according to him. 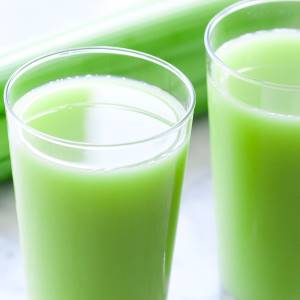 We believe that everybody is different and reacts differently. If all the advantages mentioned are even slightly true, it’s a nice bonus. So worth a try! Are you just not a fan of pure celery blending and drinking? Then we have three new versions for you!

If you want to prepare the juice the night before, store it in an airtight Mason jar in the refrigerator. Drink it within 24 hours, otherwise, nutrients will be lost!

Celery is a type of vegetable whose stems are eaten.

The celery originates from countries around the Mediterranean Sea and was formerly used for medicinal purposes and much less often consumed as a food. Later that changed. Thanks to all kinds of classic dishes with celery, such as pasta bolognese, this vegetable is now eaten much more often.

Celery grows on the ground and shoots up stems and all. Under the ground, the stems come together in a thin stump. The plant contains a lot of leaves, which are largely removed for commercial sale.

Read More: How to make carrot juice in a blender

Celery will keep for about two days in the refrigerator, but a lot longer in the vegetable drawer. You can store these vegetables in a cool, dry place for about a week.

The celery has the image of the “diet stalk”. In many movies, actresses chew on a stalk to indicate that they should not eat much. Admittedly, the celery is indeed low in calories. It might be a bit boring straight away, but in combination with other foods, it is much better.

For example, celery is used in the classic pasta bolognese with onion and carrot. We also see celery in soup vegetables. But celery raw is also very tasty and healthy. For example in a smoothie or salad with apple, raisins, and lamb’s lettuce.

This vegetable is also excellent for stir-frying and tastes good with fried bananas. A piece of celery can also be used as a snack, with some hummus or tapenade. Celery consists largely of water.

Did you know that:

Do you find the taste of celery alone too intense? Then add some spinach, cucumber or apple.

A relatively large number of pesticides are used in the cultivation of celery. So always buy the organic version, especially when you process the stems raw, such as in this juice.

Due to the popularity of this juice, celery is poorly available at the moment (especially organic). Usually, it is still possible to order. Check with your local organic store for this.

Adding lemon or lime to the juice can make it sour. To prevent damage to your glass, you can choose stainless steel or glass straws.

There is little scientific backing for this fad. Nevertheless, there are thousands of people who swear by it. If it doesn’t help, then it doesn’t hurt. Or is does it? I’ve found that regular celery can be very high in pesticides. For this reason, I would always opt for the organic variant.

I myself make a daily vegetable juice with my slow juicer, which includes a piece of celery. Purely for the taste, I really appreciate a hint of the very aromatic taste in juices, sauces, and soups.