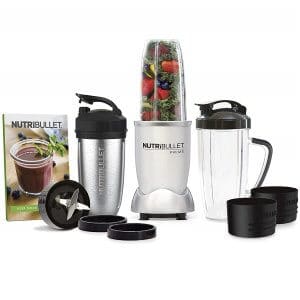 NutriBullet Prime 1000 is part of a fairly comprehensive line of blenders by the company, that all blend of course, but are differently sized and powered. At first glance, many of the models appear curiously similar, but as you move ahead to take a closer look at their specs, you can better gauge their motor power and capacities to decide which one will suit you best.

Staying true to NutriBullet aesthetics, The Prime 1000 also features a simple, compact design with no controls. Although designed specifically as a smoothie maker, it can do a lot more and become your assistant in the kitchen to facilitate various cooking processes.

You can puree, pulverize, blend, mix, grind, and mill soft and tough ingredients with this powerful blender.

The NutriBullet Prime has a 1000-watt motor that offers plenty of power to blend most veggies, fruits, nuts, and seeds without issue. It gives users just the right option to blend green smoothies and protein drinks into solid “meal replacements” where weight watchers and other health aficionados can get their fill from these heartily-sized drinks.

The working mechanism of the NutriBullet Prime remains in sync with other NutriBullet models with a basic on/off twist design. Simply place your ingredients in the cup and screw on the blade. Place your cup atop the base unit, twist to lock in place and press.

The unit performs with a powerful spin of 25,000 RPM which enables users to quickly concoct their recipes in a few seconds. You may, however, need to remove the cup and “shake” it to get all the ingredients to blend properly.

The powerful, cyclonic 25,000 RPM can generate a fair bit of heat, so manufacturers recommend using frozen fruit or ice to keep temperatures under control. For optimal performance, it’s also important to use a sufficient amount of liquid in the container, taking care not to exceed the maximum capacity line as marked.

On a side note, it is not recommended to process hot liquids or foods in the Prime.

The one feature that manufacturers have added to the Prime is a 60-second, auto-off timed option. The pre-programmed, 1-minute blending cycle stops the motor automatically when the cycle is done.

Also, the manufacturers have added suction cups to the bottom of the blender to keep it steady as the motor runs. When done using, the suction cups will keep the unit affixed to the counter with no worries of accidentally spilling your freshly prepared drink.

NutriBullet blenders can range in capacity from cups as small as 18 ounces to 32 ounces. The NutriBullet Prime ships with 3 different cups.

The first is a 28-ounce, stainless-steel, to-go insulated cup engineered to keep drinks cold for up to 8 hours. Then there are two Colossal 32-ounce cups with one featuring a handle.

The Colossal cups can hold up to .95 liters which makes for storing an extra-large smoothie easily. So, you can easily go from carrying your smoothie with the insulated cup to storing it in the fridge for later use with the Colossal cups.

All cups come with a wide mouth design that makes it easy to pour/put ingredients into the NutriBullet without any risk of spills or messes. At the same time, the wide base also allows the motor to blend ingredients more thoroughly.

Clean up of the NutriBullet Prime 1000 is fairly basic with all parts other than the blade assembly and the base fit for dishwashing. The blade assembly should be rinsed or brushed with soap right after use. This ensures that no food residue remains or builds up around the blade.

The base, on the other hand, can be wiped with a damp cloth.

NutriBullet’s nutrient extraction process makes these blenders a favorite among health aficionados. With a little help from their extremely powerful motors, NutriBullet Prime and other similar models from the company can break down the fibrous parts of plants and release healthful vitamins and minerals within. The massive RPM performance of these blenders completely pulverizes dietary fiber, seeds, pulp and skins into an easy-to-consume, smooth texture that delivers nutrients in a digestible and absorbable form to the body.

In this way, NutriBullet Prime does way more than simple juicing and blending. It brings you the goodness of whole foods in a delicious smoothie that you can take along or enjoy later on in the day.

The NutriBullet Prime 1000 borrows all the popular features from its predecessor models and pairs it up with a more powerful motor to give users a blender they can use to prepare true meal replacement smoothies.

The 32-ounce cups serve well to prepare adequately-sized smoothies that do eliminate the need to have a meal afterwards. Despite its relatively compact size when compared to other similar blenders, the NutriBullet prime can keep up well with the competition when performing basic blending needs. And given its basic design elements of no pre-settings or controls, the Nutribullet Prime still gets the job done nicely.

Overall, the NutriBullet prime is a well-priced unit for its features. It is a portable product that can take quite a load making it a favorite with many users.