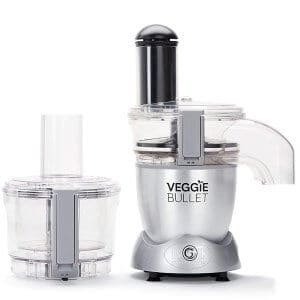 I say “mini food processor of sorts” for a reason. Basically, the Veggie Bullet offers three main functions including spiralizing, shredding and slicing. While these do fall in line with food processing tasks, a full-fledged food processor can do so much more.

The point is, this machine is best suited for people who want to make light of the task of preparing fruits and vegetables for all their meals.

The Veggie Bullet serves as a multi-task food preparation unit that takes the hard work out of preparing fruits and vegetables manually. Instead, when used correctly, it can be your ideal substitute for the knife and chopping board.

This makes it a helpful timesaver in the kitchen that can also replace multiple appliances with one single unit.

Although not a full-scale food processor, the Veggie Bullet will serve you well in three specific areas. Its areas of expertise include spiralizing, shredding and slicing food ingredients.

Both functions of shredding and slicing can be initiated by putting the blade in place and using the chute part of the unit to start shredding or slicing.

As a safety feature, the unit won’t turn on unless all parts are assembled correctly, and all attachments are in place.

Once in operation, the unit will turn off after one minute of continuous use to avoid overheating the motor.

There are two different assemblies that come with the Veggie Bullet. The first is the spiralizer assembly with an outer and inner basket, the blade and a lid.

The second is the slicer/shredder assembly with a shooter, base plate, reversible blade, and a lid.

The cleanup process is also simple for the Veggie Bullet but may be time-consuming given the various parts and attachments.

The good thing is that all parts and attachments, except the base, are dishwasher safe so everything that’s been used can go straight into the dishwasher without hassle.

Unlike other NutriBullet products that enjoy immense popularity among users, the Veggie Bullet can only boast moderate appeal.

Some concerns that Veggie Bullet reviews have voiced include the unit being bulky and having too many parts. This makes it a hassle to store in kitchens with limited space.

Performance-wise, certain design elements make using the Veggie Bullet bothersome. For instance, users note that there is a gap between the lid and the slicer/shredder blade causing food to get stuck there and sit on top of the blade. Ingredients may also get stuck in the chute requiring manual intervention.

The spout through which food shoots down is also not the easiest to clean given its downward hook.

So, Is the Veggie Bullet for You?

Given its somewhat limited food processing functions, you may well wonder if the Veggie Bullet is really worth the investment for you.

Well, Veggie Bullet reviews show that users who use the machine for a lot of spiralizing functions are the ones who are very happy with their purchase. It serves as an excellent spiralizer, being one of the fastest of its kind.

While the standard packaging only comes with one spiralizing blade, you can opt for the upgrade kit and get a few others with your purchase.

The Veggie Bullet accessory or upgrade kit brings with it a number of special blades such as the Ribbon blade, Angel Hair blade, Udon blade and the Tornado spiral blade which will give you a fair variety to choose from. These blades will let you prepare your veggie noodles in as many different ways as you like.

And while the upgrade kit will give you more versatility in spiralizing your veggies, the Veggie Bullet will still not be able to chop, mix, blend, knead, whisk or whip your foods for you.

If you purchase it from the official website, you can also a blender kit with the unit. This includes a small blender cup that isn’t large enough to make smoothies but is an excellent way to prepare salsas, sauces, and hummus.

The Veggie Bullet is a creative idea, but user reviews show mixed opinions on its performance.

The spiralizer is the highlight of this product as cranking a manual spiralizer can be cumbersome and time-consuming. The slicing and shredding functions are welcome additions if you don’t already have a food processor, but performance may be limited since there are no multiple speeds to choose from.

Anyone who has a specific need for preparing veggies quickly and in a larger quantity will definitely appreciate the Veggie Bullet. But if you’re looking for more functions than the Veggie Bullet offers, then it may be worth your while to invest in a full-on food processor.