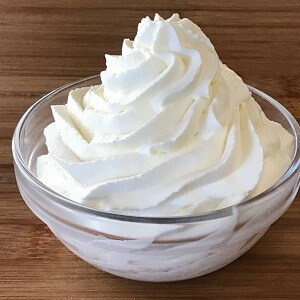 Whipped cream is one of those kitchen ingredients that everyone should know how to make. But can blenders be used instead of mixer for cream whipping? Which is to say, can you whip cream in a blender?

The answer is a little lopsided. A blender is a mixer in a way, but it is not a replacement for a hand mixer. The issue here is that the blender is not the ideal tool for the job. It is indeed possible, but blenders don’t work the same as a whisk or a mixer. Even at a very low speed, the blender works too quickly.

The blender also only blends in one area, the very bottom of the container where the blades are spinning. Because of this, it is very difficult to whip the entire batch of cream equally. You would need to push the cream deeper into the spinning blades to get an even mixing.

Still, the blender’s blades simply move too fast. Before you have whipped cream, you might accidentally have butter. There is simply no solid way to control what happens with your whipped cream once you put it in the blender.

Can Blenders be Used Instead of Mixer for Cream Whipping?

In short, you can use your blender instead of a mixer for cream whipping, but it is tedious, it could botch your recipe altogether, or you could end up with an inferior product. As such, I highly recommend not whipping cream in a blender and just using an ordinary mixer or a traditional whisk.

That said, there are some ways that you can make your own homemade whipped cream in a blender, and we will spend the rest of the article checking out some of the best whipped cream recipes for your blender.

Making Whipped Cream in Your Blender

Making whipped cream in your blender is fun, easy, and you can do it in just a few minutes. There is nothing tastier than your own homemade whipped cream. It’s healthier than what you buy in the store, it’s fresh and made with your own ingredients, and you can use it for literally everything.

Whipped cream is great for fresh strawberries, for adding to your freshly baked pie or cobbler, or just to eat straight out of the jar. Who doesn’t love a spoonful of homemade whipped cream?

Forget everyone who has ever told you that making your own whipped cream isn’t good – it is extraordinary! Making whipped cream from scratch only requires three main ingredients, you need heavy whipping cream, powdered sugar, and vanilla extract.

Most people use a hand mixer for their whipped cream, but by following these instructions and paying careful attention you can master the art of making whipped cream in a countertop blender. This method is faster, you can make more in one sitting, and you don’t even have to get your hands dirty.

This is the absolute best way for making whipped cream in your blender. While the traditional way of whipping with a whisk or a hand mixer generally works better, these are the most important steps to getting the best results with a blender. Blenders are faster, they can seriously help you in a pinch, and it takes a lot of the work out of making whipped cream.

Keep in mind that cold ingredients are the best when it comes to making whipped cream. This is because they are easier to whip. Also, if you make your whipped cream ahead of schedule and store it in your refrigerator for several days, it is going to be ready and fresh when you need it. All you need is a quick whisk before serving it again chilled.

Plain white whipped cream is awesome, but if you feel like mixing it up a bit with some flavors, that is totally OK too. You can literally add any flavor you want to a traditional batch of vanilla whipped cream. This is a great idea for spicing things up during different seasons. There is nothing more festive than a flavored whipped cream.

But there are so many more flavors than that. If you want to eat strawberries and raspberries with some scrumptious whipped cream, try adding chocolate into the mix for an exotic flavor. I myself enjoy peanut butter whipped cream whenever I’m having ice cream pie or brownie trifles.