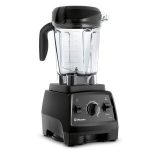 All blenders do pretty much the same thing; it’s just that some do it better than others. And with a company like Vitamix, how do you decide which of their blenders will serve you best?

That’s why today I will be comparing two popular models the Vitamix 5300 vs 7500 against one another. Both these blenders are strikingly alike with a lot of identical specs and some not so. While the Vitamix 5300 falls in the Classic Series by the brand, the Vitamix 7500 is its upgraded Next Generation model.

Both can easily qualify as luxury products when you consider their price points, but the quality they deliver justifies the cost. Plus, Vitamix backs up both products with a generous 7-year warranty that testifies to the manufacturer’s faith in their blenders.

The appeal of the Vitamix 5300 lies in its variable speed component, sizeable container, powerful stainless-steel blades, and a self-cleaning mode, all of which lend to its ease of usability.

With its 2.2 Hp motor, the 5300 can boast of some impressive blending power. This blender can take on tough ingredients easily and have no trouble working through them to give you smooth, consistent blends.

The speed control on this unit is variable and easily adjusted. You get 10 comprehensive speeds for greater control and a Pulse feature to crease coarse, textured blends.

One of the biggest design features of the Vitamix 5300 is its thermal protection system. Because this is a powerful blender, it can present the danger of heating up when overloaded or used for a longer blending cycle. But this is prevented with a radial cooling fan fitted to avoid any overheating issues.

On another front, the 5300’s container has received a fair bit of attention as it parted ways with other Classic series pitchers, all of which showcased a taller, slimmer blending jar. The obvious disadvantage of a taller pitcher is the hassle of under-cabinet storage.

But the 5300 did away with this problem by shortening their container by a significant 3 inches without giving up on its 64-oz capacity.

Pairing consistency with power is the highlight of the Vitamix 7500, yet it remains one of the simplest blenders to use on the market.

When you compare the 7500 to the Vitamix 5300, there may not be a noticeable difference in blending quality or capability as the two share identical specs regarding blades and container size. So, anything you can make with the 7500, the 5300 will also do it just as well.

Where you will notice a difference, however, is that the 7500 will do this and much more a lot quieter than the 5300. Equipped with the Next Gen motor, the 7500 gives improved performance in terms of being slightly stronger, a lot more quieter, and runs cooler than the 5300.

The cooling capacity of the 7500 also comes in handy when you prepare soup in this blender. This blender is also versatile enough to handle both cold and hot ingredients in the same container.

Even though there are no preset programs on the unit, you can make soup by increasing the duration of the blend at the highest speed. The variable 10 speed controls let you maneuver between low speeds for rough chops and texture and higher settings for smoother consistencies.

Both the Vitamix 5300 and 7500 are high-performance, convenient machines that have great value to boot. Both will also give you the right experience to engage in professional style blending from the comfort of your kitchen, so what gives one an edge over the other? Here are some prominent differences between the two models.

The Vitamix 7500 has a Next Generation motor and motor housing whereas the 5300 comes with the standard Classic 2.2 Hp motor and housing. One difference that these specs make is that the Next Gen motor housing lets the 7500 do its job quieter than the 5300.

Another difference is that the 7500 features bigger air intake vents that allow it to keep its motor cooler for longer. When this feature is paired with the blender’s radial cooling fan and thermal protection system, the chance of overheating the machine gets reduced significantly.

The 7500 is rated as a much quieter blender despite having a slightly more powerful motor than the 5300. This is due to the upgraded noise and vibration dampening feature missing from the earlier Vitamix models. Because of the suspended NextGen motor housing, this blender delivers a 40% quieter performance than other Vitamix models.

Each blender comes with some standard parts and accessories such as the basic low-profile 64-oz container, a tamper, and a getting started recipe book. But with the 7500 you also get an additional 200+ recipes in the Simply Fresh Cookbook and an instructional DVD.

In the case of today’s two contestants, both blenders have way more similarities than differences. They both have similar speeds, controls, and a pulse feature. Both also come with the same 64-oz low profile blending jar, 4-pronged stainless-steel blades, and include a 7-year warranty to back their performance. So, which one outdoes the other in the end?

Well, the Vitamix 7500 has the edge with some advances in technology. Equipped with a newer motor, this blender gives a quieter performance than its predecessor. It blends just as well but comes with superior cooling features than the Vitamix 5300.

The 7500 is also rated best overall as it would be better suited for kitchens where a lot of blending goes on all day long. If you blend day in and day out, the 7500 makes a better choice with its lower noise operation and improved cooling. Of course, there is a higher price point, but that comes with the added convenience factor.