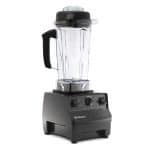 Both blenders come from the brand’s Classic Series with the 5200 upholding its popularity over many other newer, more technologically advanced models. And maybe it is this long-standing repute that made the manufacturers give the 5200 a makeover in the form of the updated Vitamix 5300.

Since both blenders come from the same series, they do share a lot of the baseline features. But then, there are also some subtle and some not-so-subtle differences between the two as well.

To see whether the 5200 suffices well enough for you, or its upgraded version with a higher price point is what you’re looking for, let me walk you through what these two machines have to offer.

There’s no denying it, the Vitamix 5200 is a blender that means business. After all, it is a model that continues to be successful despite facing fierce competition from newer models and blenders with more features.

A blender that offers functionality, reliability, durability, and great value for the money leaves very little to desired. And that is exactly what the Vitamix 5200 proposes to do.

This blender does all this and much more with its 2HP motor crushing ingredients to create smooth blends in a matter of seconds. The machine is also equipped with an automatic shut off system to stop it when overheated.

You get access to 10 variable speeds, an On/Off switch, and a High/Variable speed control. However, there is no Pulse feature, and this alone may be the 5200’s biggest downside.

The Vitamix 5200 features a tall, slim container that may not be the most convenient to store. That said, the slim design of this 64-oz pitcher makes it suitable for not only preparing large batches given its generous capacity but also smaller, single servings as well.

The narrow layout at the pitcher’s base allows you to blend fewer ingredients without them spreading out too thinly.

The Vitamix 5300 comes into the field with more torque with its higher-powered 2.2 HP motor, larger blades, and a thermal protection system on top of the radial cooling fan.

Vitamix takes things up a notch by introducing a low-profile container with the 5300. This is perhaps the biggest area where user complaints addressed the inconvenience of storing the 5200.

Here, manufacturers saw room for improvement and came up with a space-efficient design by reducing the height of the container. Trimming down the height by a total of 3 inches and making the base a bit shorter as well, the 5300 fits nicely under most kitchen cabinets.

Along with the container’s space-saving capacity, this container is also easier to clean given its wider base. This lets you maneuver your hands easily at the base of the blending jar.

The 3500 runs with a 2.2 HP motor which is the highest horsepower the brand offers in its home products line. Yet, this model runs quieter than the 5200.

Even though both Vitamix blenders have adequate running power to handle blending jobs nicely, the 5300 is slightly more powerful and much quieter which gives it a modest edge in this category.

The Vitamix 5300 upgrades its functions by adding in a Pulse feature. It replaces the High/Variable speeds switch on the 5200 with a Pulse button that adds to the efficiency of the unit and takes its performance to the next level.

Vitamix 5200 users improvise by switching the power on and off quickly to achieve the Pulse effect, which, though not ineffective, is still inferior to a designated Pulse button.

The most obvious difference between the two models is their containers.

These two C-series blenders have containers that are incompatible with each other. While the 5200 is equipped with the Classic container, the kind that the rest of the series carries as well, the 5300 comes with the Next Generation container.

In comparison to the Classic container, which is taller and slimmer in design, the 5300 container has a low profile but the same 64-oz capacity as its taller counterpart.

These size and design differences also affect the ease of storage for the two blenders. The Vitamix 5300 with its low-profile blending jug fits nicely under most kitchen cabinets but the 5200 may fail to do so.

Even though both blenders feature dull, hardened, laser-cut, stainless-steel blades there is a variance in size.

The 5200 has blades which are 3 inches in diameter while the 5300 blades increase the diameter by one additional inch. As such, the Vitamix 5300 has a larger cutting area which gives a higher level of cutting efficiency as well.

Both the Vitamix 5200 and the Vitamix 5300 are powerful machines able to handle a variety of blending tasks. They stand neck-to-neck with the 5300 offering some additional features.

These additions may just give the 5300 the edge it needs to stay ahead of its earlier counterpart. The Vitamix 5300 is rated best overall for users who value their counter space and find the Pulse feature a handy addition to their blending and mixing needs. It is also an improvement over the 5200 in terms of more motor power, slightly larger blades, and space-efficiency.

Yet, the 5200 remains an allrounder to this day. If you don’t have issues with storage space or only use your blender to make smoothies and shakes, then the lack of a Pulse button won’t be bothersome. And if you don’t have the budget to spare, then the Vitamix 5200 would make the ideal choice for your kitchen.