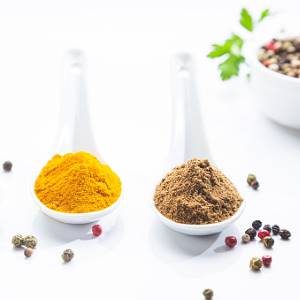 Turmeric and cumin are two spices that are frequently utilized in Indian cuisine. They can be used in food for flavoring, coloring, or preserving. Both spices are very popular in Indian cooking.

So what’s the difference between turmeric and cumin? Although they may appear similar, they have distinct properties. It is important to know how these two spices compare to each other because you don’t want to use one when you need the other.

In this turmeric vs cumin ultimate guide, I’ll compare them side-by-side, focusing on their flavor, look, uses, advantages, and more.

The main difference between turmeric and cumin is that turmeric is a root, while cumin is a seed. Turmeric has a slightly bitter taste and it’s orange in color. Cumin is more peppery and has a nutty taste.

Turmeric is also a better source of antioxidants than cumin. Antioxidants are nutrients that help protect your cells from damage. This means that turmeric can help fight off free radicals, which can cause cell damage and lead to diseases like cancer.

Cumin doesn’t have as many antioxidants as turmeric, but it does contain some important nutrients like iron and magnesium. Iron is essential for making red blood cells, which carry oxygen throughout your body. Magnesium is important for maintaining nerve and muscle function.

Fresh turmeric is an orange-colored root that looks similar to ginger. When it is ground it has a golden yellow color. You can find it fresh or dried in most grocery stores. It is often sold as a powder, which you can use to make curry dishes.

Cumin comes from the plant known as Cuminum cyminum. These seeds are about 1mm wide and dark brown to yellow in color. Most recipes call for cumin that has been ground into a powder form. The powder is yellow in color, although not as bright as turmeric.

Turmeric Vs Cumin: Where Can You Find Them?

Turmeric grows near the equator in Southeast Asia, India, China, and Japan. Today it is grown throughout India and many other countries around the world because of its popularity as an ingredient for flavoring curries and other dishes. This spice has also become popular in the United States in recent years.

Cumin is native to the Mediterranean region, but it is now grown all over the world. It can be found at most grocery stores in either its whole seed form or ground into a powder.

Both turmeric and cumin are used as spices to add flavor to food. They are also sometimes used as coloring agents because they can impart a yellow or orange hue to dishes. Additionally, both spices have been shown to have some antimicrobial properties, meaning that they can help kill bacteria.

Turmeric is most commonly used in Indian cuisine, while cumin is popular in many Middle Eastern and Mexican dishes.

Do Turmeric and Cumin come from the Same Family?

Turmeric and cumin are not related. Turmeric comes from the Curcuma longa flowering plant which belongs to the Zingiberaceae, or ginger, family.

Cumin seeds come from the Cuminum cyminum plant, which is part of the Apiaceae or Umbelliferae family. This is the same family as carrot, parsley and, celery and is completely unrelated to turmeric.

Can I Substitute One Ingredient for the Other?

You shouldn’t substitute turmeric for cumin, and vice versa. They have distinct flavors and appearances and you’ll be able to tell right away if you try using one where the other is called for.

What Can I Substitute for Turmeric?

If you only want the colorful properties of turmeric, the best option for a substitute would be saffron. Saffron has the same bright yellow color, but it comes from a flower rather than a root like turmeric.

If you are looking for a substitute for the flavor of turmeric, the closest thing to try would be ginger. It’s not exactly the same taste, but it is similar. If you are really stuck, try using mustard.

What Can I Substitute for Cumin?

Cumin may be hard to find in some areas, so an appropriate substitute would be coriander if you can’t get your hands on cumin or already have some in your pantry. Like cumin, the flavor of coriander is quite strong and peppery.

Other options include star anise, caraway seeds, and fennel seeds.

For best results when cooking with turmeric, it’s important to remember that this spice tends to lose its flavor over time. If you buy fresh turmeric, use it within six months so that your dish will still taste good.

Cumin should last about a year if stored correctly in an airtight container or jar. Storing cumin in the refrigerator will help keep it fresher longer. And always smell your spices before adding them to a recipe to make sure they’re still potent enough to impart their flavor into cooking.

When it comes to flavor, turmeric is slightly bitter and has a peppery bite to it. It also has a slight garlic-like scent. Cumin is nuttier and has a stronger spicy taste than turmeric.

Cumin is also much more pungent than its orange counterpart. As such, you should use less of this spice when cooking your food for flavor and color purposes.

Turmeric Vs Cumin: Which Is Better?

Turmeric is much more beneficial than cumin when it comes to antioxidants. So if you are looking for ways to include more turmeric in your diet, look for dishes like curries and rice, or add some fresh or dried root to other dishes. You can also try making a homemade curry powder with fresh or ground turmeric root along with other spices to give it extra flavor.

Cumin has its own health benefits that may be important to you. It contains iron and magnesium. If your diet does not contain enough of these nutrients, then adding cumin could have an impact on your overall health. However, don’t use too much because this spice does have a strong flavor which could overpower the dish if used in excess.

Both Turmeric and Cumin are popular spices that can be used to flavor food. They both have some antimicrobial properties, but the main difference between these two is their appearance – one is a root while the other is a seed.

In addition, Turmeric has more antioxidants than cumin as well as iron and magnesium, making it slightly better for you in terms of nutrition. If you want to include more turmeric in your diet without adding too much spice or changing up all of your recipes, try incorporating fresh or dried roots into dishes like curries or rice.