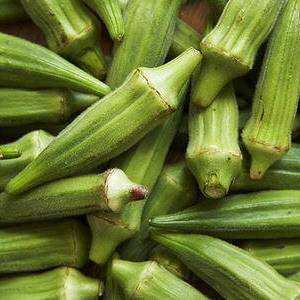 Okra is an unusual vegetable that can be used in many different types of dishes. It has a unique shape and texture, so it might seem like you’re out of luck if you don’t happen to have any lying around.

But luckily for you, there are plenty of substitutes for okra that can provide the same great flavor without all the fuss.

Also known as lady’s fingers, okra is a unique vegetable with a wide variety of uses. It comes from the mallow family, which also includes cotton and hibiscus.

Okra has been around for thousands of years, first appearing in West Africa. After making its way to North America it quickly became popular for both its flavor and appearance. Today, many people enjoy eating okra raw, pickled, or even deep-fried.

What is Okra Used For?

Okra is often used in popular dishes from around the world. It can be cooked or eaten raw, so it’s a versatile food that can be enjoyed by vegans and meat-eaters alike.

It is one of the main ingredients in gumbo, a popular Cajun dish. It can also be used in stews and curries and is usually used as a thickener.

What are the Best Substitutes for Okra?

If you don’t have any okra on hand, or if you’re looking for something different, there are plenty of substitutes that can provide a similar flavor profile.

Zucchini is a common vegetable that can be used in many different ways. It has a mild flavor and a slightly crunchy texture, making it a good substitute for okra.

Eggplant is another versatile vegetable that can be cooked in a variety of ways. It has a strong flavor and a soft, spongy texture, making it a good choice for dishes that call for okra.

Green beans are a common side dish, and they can be cooked in a variety of ways. They have a slightly sweet flavor and a crunchy texture, making them a good substitute for okra.

File powder is made from the leaves of sassafras, a tree native to North America. It can be used as a thickener in gumbo and other dishes, has a sweet flavor with hints of licorice, and can be found at most grocers.

Cornstarch is a common thickening agent found in most kitchens. It has a slightly sweet flavor and can be used for baking, thickening sauces, and more.

Potato flour comes from dehydrated potatoes, and it can be used to thicken soups or stews. It has a neutral flavor that provides the same consistency as okra when mixed with water or another liquid. Depending on what you’re cooking you may want to combine it with other flours like rice flour or all-purpose flour.

Arrowroot is a starchy powder made from the arrowroot plant. It can be used to thicken sauces and soups, and it has a mild flavor that won’t change the color or taste of your dish.

If you don’t have okra or any of these substitutes on hand, there are still plenty of other vegetables you can use for your recipe. If a recipe calls for 1 cup of chopped okra try using 1/2 cup each of green beans and eggplant instead. Or if a recipe simply calls for okra as an ingredient try substituting 1/4 cup potato flour or arrowroot instead.

Okra can be a fun and unique vegetable to experiment with, but it’s not always easily accessible. Fortunately for you, there are plenty of substitutes that will provide the same great flavor without all the fuss.

From gumbo to stews and curries, okra is an important ingredient in many different types of dishes. If this doesn’t seem like your thing or you don’t have access to any at home, I recommend trying one of these other vegetables as a substitute: zucchini squash (grated), eggplant (chopped finely), mushrooms (thinly sliced).

Let me know if these work out for you – I would love to hear from those who’ve used them before!