Is your NutriBullet Leaking? If you have a NutriBullet and it is leaking, then you are not alone. NutriBullet is one of the most popular blender brands, but it can leak from time to time.

In this article, I will discuss 7 of the most common reasons why your NutriBullet might be leaking, as well as how to fix them. I also cover some easy ways to make sure that this doesn’t happen in the future.

There are several causes of leaking NutriBullets; each one with its own solution. Whether your NutriBullet is leaking from the lid, container, or base, I have you covered for every situation.

Read More: Nutribullet Reviews – Which Model Is The Best?

Why is my NutriBullet Leaking?

NutriBullets are popular, but they can be prone to leaking. This may be due to a few reasons, and where the leak is coming from will help determine the solution.

NutriBullets can leak from the lid, the container, or even from the inside of the base. Let’s cover each one in detail below.

NutriBullet Leaking from the Lid

One common reason why your Nutribullet may be leaking is that you are not using it correctly. The blades must lock into place when attaching them to the blender cup before turning on your machine.

If the blades are not fully tightened into place then that could cause a leak at best and outright breakage at worst. Make sure that all parts are locked together tightly before you flip the cup upside down.

The seal or gasket is a small rubber ring that sits between the cup and lid. If this ring becomes damaged, then it will cause leaking from your NutriBullet’s lid.

If you have noticed that your blender has been leaking from the top, then check to see if there are any cracks in the rubber seal before buying a new one. This can also happen over time after regular use, so make sure to inspect regularly for damage.

You can buy replacement gaskets for your blade assembly, but the official advice from NutriBullet is to not replace this part. Doing so may void your warranty. NutriBullet recommends that if the seal is damaged, you should buy a new blade assembly.

What to do if Your NutriBullet Gasket Falls Out

If your NutriBullet gasket falls out continuously, it normally means that it has become stretched and is no longer a snug fit. However, this does not always mean that the entire blade assembly needs to be replaced. There may just be something wrong with the gasket and it is possible to buy a replacement gasket.

The official advice from NutriBullet is that if the rubber ring falls out, then you should buy a new blade assembly. However, there are users who have found that if they buy a new rubber ring and place it in between the cup and lid, it will work perfectly fine.

I have personally had a NutriBullet that had black gunk under the gasket, but the blade has been fine. According to NutriBullet, you should not remove the gasket for cleaning, even though it is impossible to clean underneath it when it is in place.

In my opinion, buying a new blade assembly just because I can’t clean under the gasket is a bit of a design flaw. I have removed the gasket for cleaning, and when I put it back in everything worked fine.

If you find that your gasket keeps falling out, consider buying a replacement and see if that solves the problem. 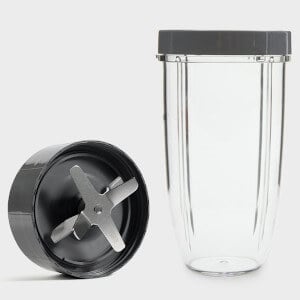 If your NutriBullet is leaking from the container, then this may be due to overfilling. When blending hard ingredients like ice or frozen fruit you should only fill up half of the cup before adding liquid and softer foods.

This will help prevent leaks because there is less pressure inside when mixing these harder items together with liquids. If you do not follow this rule, then it could cause a leak at best or outright breakage in some cases.

The NutriBullet has a guide on the container that shows approximately how much liquid and food should be added to the cup during use. This will help you avoid overfilling in the future, which is a common cause of leaking NutriBullets.

Container not Secured to the Base

Another reason why your NutriBullet may be leaking is that the container isn’t properly attached to the base. The blender cup should fit snugly into place, which will allow for proper blending and prevent leaks or spills while you are using it.

If this does not occur, then there could be a problem with either your blade assembly gasket (if you’ve already checked) or with faulty parts due to wear and tear. Here again, if any seals appear damaged then you should replace them before continuing use of the machine; they do come in separate parts so make sure that only one part is replaced at a time.

As mentioned above, check first to see if anything is damaged on your blade assembly gasket. If this is okay, then make sure that the container fits properly onto the base. Without a good fit, there could be gaps where liquids can leak out or spill while you are blending hard ingredients like ice or frozen fruit.

Container may be Cracked

If you’ve been using your NutriBullet for some time, then there’s a chance that the container itself may be cracked. This could cause liquids to leak out during use and should always be replaced as soon as possible if it appears damaged or worn down.

The same goes for any of the gasket parts; if they appear damaged in any way after regular use, then replace them right away before continuing with blending. If these seals are not intact, then leaking will occur at best and can even ruin your blade assembly completely by letting food escape into other areas while blending causes cross-contamination inside the machine.

Read More: Can You Put Ice In A Nutribullet? Let’s Find Out

NutriBullet Leaking from Power Base

While leaking can sometimes happen during use, it is much more common to see leaks coming from the bottom of your NutriBullet. This happens when liquid and food spill out through the middle shaft where blades are housed inside.

Leakage at this point means that you should clean up what comes out immediately because there could be metal shavings mixed in with these liquids. The best way to prevent leakage here is by always properly cleaning your blender after each use.

If your base seems like it is leaking when running, then this could indicate an internal problem with one of its components. There are two main parts inside that can leak: The gasket ring and the blade assembly seal.

Both of these pieces may need replacement if they become damaged or worn down with time after regular use; however, I recommend replacing them together for both safety and convenience reasons (they come as a pair).

Why is my NutriBullet Leaking Black Liquid?

If you finish blending a delicious smoothie only to find there is a horrible black substance mixed into it, then you probably have a problem with the bearings in the extractor blade.

The bearings are coated in grease to keep them lubricated, and when any of the seals are broken or worn down, this grease can leak out.

This black liquid is called “black sludge” and should be cleaned from your container as soon as possible before it gets into any other materials or food you have blended. If left unchecked, then the material will dry up inside of your machine due to exposure to heat and potentially ruin a component in one way or another.

If the seals in your extractor blade are broken, then this may indicate that it is time to replace the blade. When you do, make sure to buy a new set of seals as well or else your problem could persist even after replacing the component.

How to Clean the NutriBullet Base after a Leak

When you have finished blending something, the base of your NutriBullet may be wet or even worse: there could be food spilled inside around where the blade is housed.

If this happens to you on a regular basis, then it is probably because leaking has occurred at some point during use. This can happen for several reasons that are previously detailed in this article.

The best way to clean up any spillage from all components involved will require removing them and washing by hand with warm soapy water and rinsing completely. You can also try using a toothbrush to clean up any hard-to-reach areas where food may have gotten stuck.

To clean the base of your NutriBullet, you can wipe it down with hot soapy water. Be careful not to get water into the center where blades are housed because this can damage components.

It also goes without saying that you should NEVER submerge the NutriBullet base in water or place it in the dishwasher. The base of the NutriBullet contains all of the electrical components, so should never get wet.

Read More: Is The Nutribullet Dishwasher Safe? Let’s Find Out

Is your NutriBullet Leaking – Final Thoughts

If your NutriBullet is leaking, then you are not alone. People often wonder why their blender leaks and what to do about it. Luckily, the causes of leakage vary depending on where they leak from; with each one having its own solution.

Most of the time it will be an easy fix and you can save yourself a lot of money and time by doing it yourself.