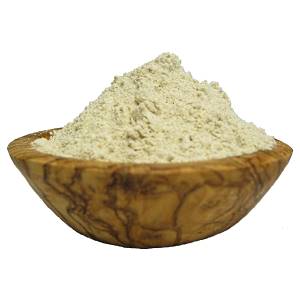 Mahlab is an aromatic spice that is mostly used in Greek and Middle Eastern cooking. It’s made from ground-up cherry pits, which are typically thrown away after the fruit has been eaten.

Mahlab can be used to make everything from marinades to meat rubs and gravies and is also used in baking.

If you need a mahlab alternative, I have you covered. This article will teach you how to make a mahlab substitute at home with ingredients you probably already have in your kitchen.

Why Do I Need a Mahlab Substitute?

The problem is that mahlab is very labor-intensive to process. To extract the flavor and color from the ground-up pits, it has to be first soaked in water.

Then the pits are dried at extremely low temperatures for an extended period of time. And if that’s not enough, they have to be cracked open to get the tiny kernel inside.

Because the demand for mahlab has decreased for the past few decades, farmers are not paid as much as they were, meaning there is even less incentive to market mahlab.

For the reasons above, it can be difficult to get hold of mahlab, which is why there has been a steady year-on-year increase in its retail price.

That’s why I recommend that you should make your own mahlab substitute at home with ingredients you probably already have in your kitchen.

If you can’t get your hands on Mahlab, there are a few different substitutes you can use. These include:

This is by far the best mahlab substitute out there. Both almond extract and star anise have a very similar flavor to the real thing, so try this one first before making any other substitutions.

Star anise is usually sold whole in the spice aisle, but there is no need to crack it open. Just grind up about 5 pods and you’ll have enough star anise for your mahlab substitute.

This flavor combination is very powerful, so only use a pinch of it for your mahlab substitute.

Read More: Can Blenders Crush Almonds? 3 Of The Best Tips

This is the second-best mahlab substitute. It’s not quite as tasty or versatile, but it can be used in just about any recipe that calls for mahlab.

The almond liqueur substitute is much more concentrated than the star anise and extract substitute, so make sure you add in smaller amounts and taste as you go.

Another great mahlab substitute is ground fennel seed and cardamom. Both ingredients have a warm, anise-like flavor that’s slightly different from mahlab but still very familiar in the right recipes.

Both of these spices are used in many Middle Eastern dishes, so it’s worth having both on hand anyway even if you don’t make your own mahlab substitute.

It’s difficult to get hold of tonka beans, but they are a good alternative. In fact, this substitute has been used for decades.

The flavor from ground tonka beans and almond extract is almost the same as mahlab, so one could easily be substituted for the other in a pinch.

Cinnamon is a common ingredient in many dishes and desserts, so you can usually get your hands on some at the supermarket.

When combined with bay leaf and cloves, they create a similar flavor to mahlab and can be used as an excellent substitute.

Just like the other substitutes listed above, this one is not quite as versatile as mahlab itself but still great for making meat rubs and marinades or adding to baked goods.

How to Make a Mahlab Substitute at Home

If you’re interested in making your own mahlab substitute, here’s how:

1. Start by grinding up about 10-15 almonds in a food processor or blender until they are reduced to a fine powder.

3. Add a few drops of water and keep mixing until you get a fluffy paste that forms into a ball when squeezed in your hands (like play-doh).

This mixture should be similar enough to mahlab that you can use it as a substitute, but there are some potential pitfalls:

If you’re going to use this mixture in a sauce or gravy, it’s best to just use the almond powder and anise extract by themselves. If you plan on using it in a recipe that has other strong flavors (like baked goods), then combine 1/2 tsp of almond powder with 1/4 tsp anise extract plus 1/8 tsp glycerin per 1 Tbsp of mahlab called for in your recipe.

In many cases, making your own mahlab substitute won’t save you any money since ground almonds are relatively expensive. But if you can get them at a good price, it’s definitely worth the effort so you can avoid using an unreliable or potentially low-quality spice.

Read More: Turmeric Vs Cumin: What Is The Difference?

Does Mahlab have any Alternative Names?

If you have scoured the spice aisle or spent 2 hours searching online for mahlab without luck, you can try looking for one of mahlab’s alternative names. These include:

Mahlab’s flavor has been described as being very similar to anise seed, with some nutty and vanilla notes. It is used most often in baked goods so it adds a warm, sweet flavor with hints of grass or hay.

It also has a slightly different texture than anise seed – it’s crunchier so you won’t want to use mahlab powder for making teas, smoothies, etc.

How is Mahlab Used?

As mentioned above, mahlab is mainly used in baked goods like bread and cookies where it imparts a strong flavor that pairs well with chocolate or nuts.

It can also be used as the main spice in meat dishes (especially lamb) since both ingredients are used widely in Middle Eastern cooking.

Mahlab is often paired with cinnamon or cloves, either of which can make a suitable substitute for mahlab on their own.

How Long Can You Keep Mahlab?

Whole kernels will last for 1-2 years when stored in a cool, dry place in an airtight container. You can freeze the kernels to make them last even longer. The kernels will give off a strong rotting smell when they start to go bad.

Ground mahlab loses its flavor quickly once it is ground, so it’s best to make only as much as you will need and use it within a month or two. It also helps to store mahlab away from heat and light since this can make it lose flavor more quickly.

In conclusion, it is possible to make a Mahlab substitute at home. However, the results may not always be as good as using original Mahlab if you are looking for a more authentic flavor or color.

The almond-based mixture will still provide a flavorful and aromatic option that can work in many recipes though.

If you’re interested in making your own mahlab substitute at home, I have provided detailed instructions on how to do so with ingredients found in most kitchens.