If you are looking for immersion blender substitutes, you came to the right place. There are a variety of kitchen appliances and tools that can help you blend, mix, and puree food without an immersion blender.

Immersion blenders are great for small jobs like blending dressings and sauces quickly and easily. They are small, simple to use, and are very popular with home cooks. But what if you don’t have one?

In this article, you will find out what the best immersion blender substitutes are and how they can be used in your kitchen. As well as some of the most popular alternatives that people use instead of a hand blender.

Read More: What Are Immersion Blenders Used for – 15+ Simple Tips

What is an Immersion Blender?

An immersion blender, or hand blender, is a small, stick-shaped kitchen appliance used for blending soups and other foods in the container they are being prepared. The blades can be detachable or built into the handle of the blender to create a single device that is easy to store away when not in use.

An immersion blender has two primary functions: it purees food by slowly pushing it down into the blades while it is running, and can also be used to mix ingredients.

When using an immersion blender, simply turn on the appliance and place it in whatever food you are trying to blend or mix until it reaches your desired consistency. Then stop blending when you feel like enough has been mixed together. Some people prefer their soup completely smooth, others may want some chunks of vegetables still present for texture purposes.

It is important that you use caution with this device because if not handled properly there is a chance that the user could suffer from cuts due to exposed sharp blades under high speeds.

Do I need an Immersion Blender in my Kitchen?

Immersion blenders are popular small kitchen appliances used by home cooks and professional chefs alike. They are easy to use, inexpensive, and can be stored away easily in a cabinet or drawer when not being used.

They are also much easier to clean than many of the other appliances on this list, making them even more appealing.

Immersion blenders do have their limitations, though, and they aren’t necessarily the right device for every job. If you are looking to chop up a large quantity of food or need something with more power than an immersion blender can offer, then it is probably best to use another appliance.

They can also be messy to use as the food isn’t contained in a container with a lid so it can splatter and get all over the place if you aren’t careful.

There are lots of kitchen appliances and tools that you can use instead of an immersion blender. Depending on what type of food you are preparing, there is an option that you may already own.

These are some of the most popular alternatives that people use instead of a hand blender. 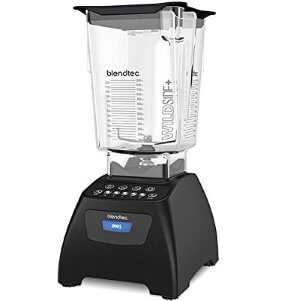 A countertop blender, such as a Vitamix or Blendtec, is a high-powered blender that can be used for soups, smoothies, and more. If you have one of these at home already then they are an excellent substitution for not just immersion blenders but many other appliances as well.

The main difference between using a countertop blender instead of an immersion blender is the size difference. Since they are larger, these appliances do not slide into the pot or bowl that you’re using as an immersion blender does. Instead, you will need to use a ladle to pour food into it and then blend until your desired consistency is reached.

Countertop blenders come in many different price points so there is one available for every home cook’s budget. Not only can they be used as substitutes for immersion blenders but they also have their own unique function which makes them stand out from other appliances too.

Since it is an appliance that can perform many tasks with ease, a food processor is a great addition to any kitchen.

A food processor has lots of blades inside its bowl where all the chopping takes place whereas an immersion blender only has two short prongs at its end that touch whatever surface they are submerged into while blending. The main difference between these two devices lies here so if this part doesn’t interest you too much, then perhaps a food processor would be the perfect alternative for you.

Food processors are great for making dressings, mayonnaise, and salsa. It’s also a good option for those looking to make nut butter.

If your household owns one of these appliances then it can also serve as an alternative to an immersion blender! A powerful stand mixer like a KitchenAid is able to not only mix dough but whip egg whites, cream butter and sugar together, knead bread dough, mince vegetables or meats, whisk batters, and more.

If any of these tasks are what you will use your immersion blender for on a regular basis then this appliance could work great in place of having both tools in your kitchen.

The main difference between using a stand mixer instead of an immersion blender lies within its size once again since it holds much larger blades that are more powerful.

An electric hand whisk is another option that can be used as an immersion blender substitute. It comes with several attachments which you can use to mix, whip, blend and puree just like the traditional appliance.

This device has a compact design so it won’t take up much room on your countertop or in storage either. If you already own one of these then they are perfect for small jobs such as making sauces or whipping cream since they don’t have nearly as many watts of power compared to other appliances available today.

Hand whisks are perfect for mixing eggs and whipping cream, and they also have the added benefit of whipping in more air into the food, making a fluffier texture.

A chopper bowl is yet another small appliance that can be used in place of an immersion blender. It consists of a large cup with blades inside and you manually push down on the top to chop ingredients.

This device is a great option for chopping vegetables, nuts, and more but it’s not meant for blending liquids or making sauces since there isn’t any power behind it. It will take longer than using an immersion blender but if you’re looking strictly only for a chopper then this item could be just what you need.

Chopper bowls don’t take up much room on the counter so if storage space is limited then this could work great for your home. They come in many different shapes and sizes; some even include additional features such as bottles where you can store whatever has been chopped within them for later use until ready to enjoy.

A potato masher is definitely the least advanced tool on this list when it comes to an immersion blender substitute. This manual tool is able to mash food just like a mixer or blender would but it does so through a little elbow grease.

This item has a flat surface where you place your potatoes, carrots, yams, and more before pushing down with the handle repeatedly until they reach the desired consistency. It’s not nearly as powerful as any of the other appliances available so if this isn’t what will be done with an immersion blender then don’t even bother wasting energy on using one for such a task.

A potato masher doesn’t take up much room at all since it can easily fit in most drawers within your kitchen which makes storage easy too. They’re very affordable tools that every home cook should have readily available for those times when mashing soft ingredients are required.

A potato masher is also the easiest tool to clean, simply rinse it under the tap and place it in the dishwasher.

If you want an easy way to blend, mix or puree food without a hand blender, there are many kitchen appliances and tools that can help.

Immersion blenders are one of the most popular small appliances in kitchens across America because they’re simple to use for tackling small jobs like blending sauces quickly. But what if you don’t have one?

It’s important not to let this stop your cooking ambitions! Luckily there are plenty of other ways to tackle these tasks safely with similar results- all it takes is some planning ahead.

I hope this article has provided some useful alternatives that will be perfect for any beginner cook who doesn’t own an immersion blender yet wants their dishes blended up well enough.