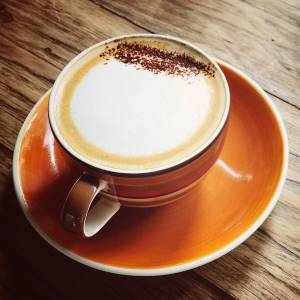 You can froth milk with any type of immersion blender, not just the expensive ones found in specialty coffee shops. If you have a small kitchen or limited space, it’s also a great option for frothing milk at home.

Read More: What Are Immersion Blenders Used For: 15+ Simple Tips

Can You Froth Milk with an Immersion Blender?

The handheld stick-type blenders are perfect for frothing because they have two blades that spin at high speeds to quickly mix the air into the milk without overheating it.

How to Froth Milk with an Immersion Blender – 3 Simple Steps

You can either heat the milk in a microwave or on the stove. A regular milk frother will froth and heat the milk at the same time, but an immersion blender won’t so you’ll have to heat it first.

You want the milk to be hot and steaming, but not boiling. Take care when handling the milk when it is hot.

Step 2: Pour the Heated Milk into a Container

You can use any container, but a tall and narrow container works best. This is because the extra air will cause the milk to expand, and you don’t want it overflowing and wasting your precious froth.

I usually use a glass jar that is just wide enough for the immersion blender to fit, and fill it no more than halfway with the milk.

Blend the milk for about 30 – 60 seconds before removing the immersion blender from the container. The mixture should be creamy with bubbles on top, similar to a latte or cappuccino foam.

Use a spoon to hold the foam back as you pour the milk into your coffee, and then spoon the foam on top for a lovely, creamy drink.

Read More: Can You Put Milk in a Coffee Maker: Definitive Answer

What Type of Milk Should I use for Frothing?

Frothing milk works better if you use full-fat milk or milk with at least 2% fat content. The higher the fat content, the more stable and dense the foam will be.

Avoid using skim milk if possible because it’s harder to froth with an immersion blender.

Also, avoid low-fat milk like almond or coconut milk for this process since they are not very stable when heated and may separate while you froth them. It is really hard to create froth with these types of milk alternatives.

How Long Does Frothed Milk Last?

Frothed milk should last about 30 minutes before going flat if kept at room temperature in an airtight container. If refrigerated, frothed milk will last about 24 hours. It is better to make frothed milk when you need it and use it immediately.

Tips for Frothing Milk with an Immersion Blender 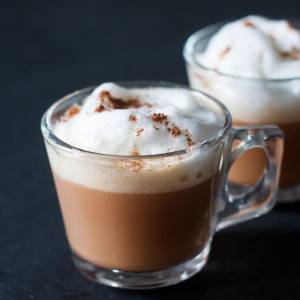 Frothing milk with an immersion blender is an easy process, but there are several things you can do to make it easier.

Use a long immersion blender. The longer the blender stick, the easier it will be to blend and froth.

Use full-fat milk. Milk that doesn’t have a high-fat content such as plant-based alternatives won’t froth well.

Use a tall container with a narrow mouth. A container that is too wide has the potential to overflow and splatter.

Heat the milk first. If you are frothing cold or cooled milk, heat it in your microwave first before blending until hot and steaming. Heating already frothed milk will destroy the air that has been added.

Avoid overfilling your container. Leave at least a couple of inches of space at the top for expansion during heating and frothing. Try not to fill the container past halfway as this can cause issues if there isn’t enough room for expanding air bubbles during blending.

Is an Immersion Blender the Same as a Milk Frother?

An immersion blender, also known as a stick or wand blender, is not the same thing as a milk frother.

A traditional handheld milk frother heats the milk and aerates the milk at the same time to create microfoam. This results in a creamy and thick texture.

An immersion blender will only aerate without heating. This will create foam but it won’t be as creamy and thick. However, it can still be used for creating delicious foam to add to your coffee.

Immersion Blender of Milk Frother – Which is Better?

A milk frother is a device that turns regular cold or cooled milk into a fresh and creamy foam for your coffee, latte, cappuccino, hot chocolate, or other drink. A milk frother also saves time as there isn’t an extra step of microwaving the milk before frothing it.

An immersion blender doesn’t heat the milk, so you’ll need to heat it before frothing.

When it comes to frothing milk, a milk frother is a better option. This makes sense as frothing milk is exactly what it is designed to do.

I don’t have a milk frother as I can’t justify having a kitchen tool that does a single job. I like my kitchen appliances to work for me, and that’s exactly what an immersion blender does.

Remember what I said about an immersion blender working for me and doing multiple jobs? One way to do this is to buy separate attachments for it.

Most immersion blenders will have attachments that do different things, such as a milk frother. This attachment still won’t heat the milk for you, but it will give you a better foam.

Other attachments for an immersion blender include a whisk, chopper, and grinder.

This immersion blender from Mueller has over 40,000 reviews on Amazon and comes with a variety of attachments.

Can you Froth Cold Milk?

Yes, you can froth cold milk with an immersion blender. Heating the milk first is not necessary.

If you want to froth cold or cool milk, this can be done with an immersion blender by following the steps above.

However, you may find that cold milk doesn’t froth as well or create the same texture. You can still use it for making cold drinks like an iced latte.

Once cold milk has been frothed, you can’t heat it. Heating cold frothed milk will result in the air bubbles being removed and you will be left with hot milk.

What is the Difference Between Steamed Milk and Frothed Milk?

Steamed milk is heated or frothed milk with no foam added. It can be used for making hot drinks like a latte, cappuccino, macchiato, and mocha.

Frothed milk is created using an immersion blender or milk frother. The process of creating foamy cream on top of your drink needs air bubbles in order for this texture to form during the heating time which results in microfoam.

An immersion blender is not designed specifically to froth milk, but it can be used as an alternate method of getting the job done.

Frothing with an immersion blender takes a little practice and patience, but once you get the hang of it, it’s easy enough that anyone in your kitchen could do it.

This post has shown 3 simple steps on how to froth milk using an immersion blender – give it a try and I promise you will be happy with the results.