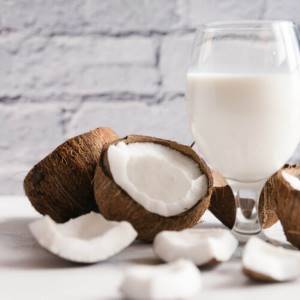 Coconut milk is a type of milk derived from coconuts. The meat of the coconut is crushed or grated, and the liquid is drawn out via a cheesecloth. Canned coconut milk and carton coconut milk are the two options available to consumers.

That brings us to the topic of today’s article: what’s the difference between coconut milk in a can vs carton? Though both are technically coconut milk, they differ significantly in their nutritional value and processing methods.

Read on to learn more about the differences between canned and carton coconut milk.

The one thing you’ll notice when you look at the ingredients list of a carton of coconut milk is the additives. In addition to coconut milk, these beverages also contain a number of added sugars and synthetic vitamins.

Carton coconut contains a lot more water than canned coconut milk, and it is usually used as a milk alternative. Many people drink it daily as a healthy alternative to fruit juice. Carton coconut milk is also used in vegan recipes because it’s cholesterol-free and contains no animal products.

Canned and carton coconut milk come from the same source (coconut), but they are processed in different ways. Here are a few of the main differences:

Which Coconut Milk Should You Choose? 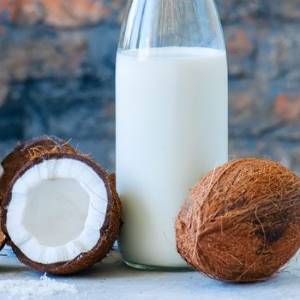 Making the right choice will depend on what you’re using coconut milk for. Canned and carton coconut milk are similar but they are used in very different ways.

You should use carton coconut milk if you plan to drink it on its own or use it in a recipe that calls for milk, such as smoothies. The carton is also a good choice if you’re looking for a milk alternative to use in your vegan cooking.

Coconut milk can be incredibly beneficial to your health, but it’s important to make an informed decision before purchasing the product. The differences between canned and carton coconut milk are subtle but significant.

Can I Use Carton Coconut Milk in a Curry?

It’s not a good idea to use coconut milk from a carton in your curry. This is because carton coconut milk has a lot more water than canned coconut milk, so it will dilute the other flavors in your dish.

Coconut milk from a can contains a lot more coconut so will give your dish a stronger flavor. It will also help to thicken the sauce so you won’t have to keep adding corn flour or wheat flour, which can break down during cooking and leave your dish tasting floury.

Can I Use Canned Coconut Milk in a Smoothie?

Canned coconut milk also contains more calories than carton coconut milk, so you may want to choose the latter if you’re watching your weight.

Read More: How To Make A Smoothie Thicker: 7 Simple Ideas

What about Coconut Cream?

Coconut cream is similar to canned and carton coconut milk, but the one difference between it and other products is that coconut cream contains a higher fat content.

The thicker consistency of coconut cream makes it popular as an ingredient in desserts and recipes that call for heavy whipping cream. Coconut cream adds richness and flavor to dishes without the need for dairy products.

Like most coconut products, coconut cream can be stored at room temperature or in the refrigerator for up to two weeks. It should not be frozen because this will change its texture and spoil its freshness.

What about Cream of Coconut?

Cream of coconut is a pre-mixed product that is used to make cocktails. It is made with a combination of coconut milk and sugar, and it has a thick consistency that makes it perfect for cocktails.

Cream of coconut is shelf-stable and does not require refrigeration. It can be stored at room temperature for up to one year.

Though cream of coconut contains some beneficial nutrients, it is not as healthy as pure coconut milk or cream. It’s important to read the label carefully before purchasing this product because it often contains additional ingredients like high fructose corn syrup.

Can You Make Homemade Coconut Milk?

Remove the meat from two young coconuts (or one mature coconut).  Combine the meat in a blender with the water from the coconut, and 1 extra cup of water.

Blend on low speed until the mixture becomes smooth and creamy. This could take 5 – 10 minutes of blending. It’s important to understand that the consistency will be thick as it needs to be strained, so don’t add too much water.

Once the coconut has been blended well, pour the mixture into a cheesecloth. Squeeze the cheesecloth into a sieve over a bowl to get a smooth and creamy texture.

You will be amazed at how smooth and creamy this homemade coconut milk is! Use it in your recipes, smoothies, or just during it straight from the jug. The coconut milk will last in the refrigerator for 4 – 5 days.

Read More: How To Make A Smoothie Without Milk (Lactose-Free & Vegan)

Is Canned Coconut Milk Bad for Your Health?

When taken in moderation, canned coconut milk is not bad for your health. It does contain a high amount of saturated fat, which can lead to weight gain if consumed in excess.

Canned coconut milk also contains sodium, so it’s important to read the label carefully before purchasing this product. Too much sodium can cause high blood pressure and other health problems.

Canned coconut milk is a good source of vitamin C, potassium, and magnesium. It also contains some dietary fiber, which is beneficial for gut health.

Overall, canned coconut milk is a healthy choice when consumed in moderation. Just be sure to read the label carefully before purchasing to make sure you’re getting the right product.

Why is my Canned Coconut Milk Solid?

If you open a can of coconut milk and it is solid, don’t panic. This happens because the coconut tends to separate from the water, leaving a solid chunk of coconut.

This is perfectly normal and is usually a sign of good quality coconut milk. Just give a good stir before use, or use a whisk if you want a smooth consistency.

Can You Add Water to Canned Coconut Milk?

You can add water to canned coconut milk, but you will dilute the flavor. You also run the risk of making it too watery and ending up with a thin consistency.

If you are going down this route, you may be better buying carton coconut milk which is formulated to be thinned with water.

Can I use Coconut Milk Instead of Milk in Baking?

Yes, you can use coconut milk in place of milk in most recipes. Coconut milk is slightly flavored, so it will add a hint of coconut to the recipe.

Coconut milk has a higher fat content than regular milk, but it still works well when baking. You may need to add 1/4 cup more for recipes that require a larger volume like cakes or brownies.

Coconut Milk In A Can Vs Carton – Final Thoughts

Coconut milk is a type of dairy-free beverage that can be found in both canned and carton form. Canned coconut milk has the original source, but also contains more fat than other types of milk including cow’s milk or soy.

These added sugars are not always good for your health, so if you want something with fewer ingredients then go for canned coconut milk instead.