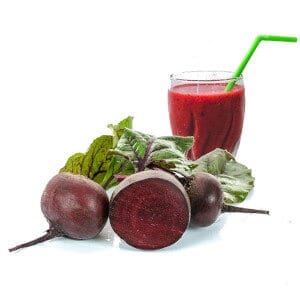 There is absolutely nothing wrong with getting your beets out of a can. If you want to use canned beets in smoothies, it is totally up to you. Even if you don’t prefer canned vegetables, it’s worth trying canned beets just for how easy they are to incorporate into different recipes.

I can tell you that unlike other vegetables that taste gross and disgusting when taken out of a can, beets are not actually that bad. Beets retain much of their flavor when they are canned, and so it is actually a little tricky to tell them apart, a fresh beet from a canned beet.

Plus, canned beets come thick with lots of juices that you can add to your smoothie. Canned beets maintain just about the exact same nutritional value as their fresh counterparts, and so you still get a huge serving of fiber, iron, and folate when you eat canned beets.

Read More: What is the best blender for making smoothies?

The Benefits of Using Canned Beets

There are many benefits to using canned beets. They are convenient, they’re cost-effective, and they have a very long shelf life. Canned beets are able to retain their nutrients for up to two years while sitting on the shelf. This is phenomenal, and it allows you to have instant access to your beets at any time.

Then there is the affordability. Beets are generally cheaper to buy in a can than to buy fresh. In fact, canned beets are almost half the cost of beets that are fresh. They are also far more convenient to make into your smoothie or into any other recipe. You see, fresh beets usually take anywhere from 30 to 60 minutes to fully cook. They also must be peeled before you can add them to a dish.

But with canned beets, you simply open the can and pour the beets into your smoothie or into whatever dish you’re cooking. There is absolutely no preparation on your end, other than opening the can.

And if you’re worried about nutritional value, don’t! Canned beets have basically the same nutritional value as other beets. The only difference is that fresh beets typically have more phosphorus, more potassium, and more folate.

How to Prepare Canned Beets

Preparing canned beets is extremely simple. All you need is to drain them and then add them to whatever it is you’re making. In the case of smoothies, simply open the can and pour the entire mixture into your blender. You can even substitute some liquid ingredients for the liquid syrup that comes inside the can of beets.

If you are adding them into a salad, you will probably want to drain the juices from the can, heat the beets, then mix in a bit of butter and a splash of lemon juice for flavor. Because canned beets retain such powerful natural flavor, you can use them in just about any recipe, including soup and borscht.

The only thing to keep in mind is that canned beets do contain a significant amount of salt, as it is needed to keep them fresh. You can expect about 300 milligrams of sodium per can. But if you quickly rinse the beets before adding them to your recipe, you can reduce the total salt content by about 40 percent.

Read More: What are the benefits of drinking beetroot juice first thing in the morning? 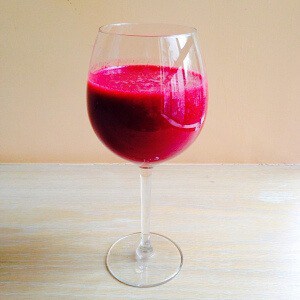 The smoothie recipe we are looking at today calls for beets, carrot juice, sliced peaches, and even a large apple. This is a fantastic recipe in which you can hardly taste the overpowering flavor of the beets, but will turn out a beautiful red color with a bold taste.

While most recipes call for using fresh beets, this is nonsense. You don’t need to use cooked or uncooked beets, and you don’t need to use organic beets fresh from the farm. You can absolutely use a can of beets as the main ingredient in your smoothie.

Lots of people also talk about storing their smoothies for several days, but I don’t recommend doing this when working with beets. These smoothies are better consumed immediately, especially since after a few days in the refrigerator all the ingredients are going to separate and it is going to get gross.

This smoothie is full of carbohydrates and good dietary fiber. There will be about 24 grams of sugar and about 213 milligrams of sodium. There are only 2 grams of fat. But the real bonus to this drink is the nutritional value you get from the beets, the celery, the ginger, and the carrot juice.