Can you blend hot liquids in a Ninja blender? Blending hot liquids can be tricky. For many of us, our first thought is to use a blender to create a smooth and delicious soup. For those that like a lump-free consistency, a blender is the first choice.

In this article, I will discuss blending hot liquids in a Ninja blender and what is the best way to do it safely.

Can You Blend Hot Liquids in a Ninja Blender?

Blending hot liquids is something that can be done in a Ninja blender. There are a few important things to think about before you begin.

According to Ninja, you can add hot liquid to your Ninja blender as long as the temperature doesn’t exceed 180°F/82°C. You should let very hot liquids cool slightly before adding them to the blender.

You should also only fill the container halfway. This will prevent any excess heat from escaping into your kitchen as well as prevent injury from steam or splattering liquid.

The best way to blend hot liquids in a Ninja blender is by slowly adding small quantities at a time until it reaches your desired consistency.

Always read your blender manual before attempting to blend hot liquids in a Ninja blender. There are many different models of Ninja blenders available, and each model has different specifications.

How Can You Safely Blend Hot Liquid in a Ninja Blender? 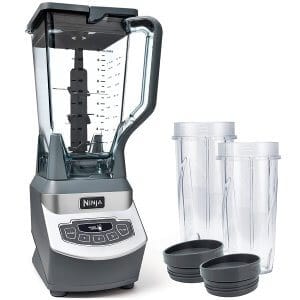 There are several ways you can blend hot liquids in your Ninja blender, but they all have their own set of pros and cons. The important thing is to always take safety precautions when blending hot solids or liquids.

Now, let’s take a look at the safest way to blend hot liquids in your Ninja blender. The best method is to divide it into batches and only fill your jar about halfway full each time. This will prevent excessive pressure build-up inside of the jars which can lead to dangerous spills of hot liquid.

To help stop steam from building up inside the blender, it’s a good idea to remove the pouring spout cap while blending. Cover the spout with a clean dishcloth, or similar material. This will stop the liquid splattering out, and also help the steam to escape.

Before removing the blender jar from its base after blending hot liquids in your Ninja blender, make sure all pressure has been released before opening it up. If there’s still steam coming out when you open it, find another way to release any excess heat or allow more time for cooling naturally inside of the jar before moving forward with your next step.

Before pouring your hot liquid out of your Ninja blender, you should always hold a dish towel over the lid and spout to prevent any liquid from splattering.

Never place your hand directly over the blender jar when removing it from its base because there will be residual heat that could burn your skin or cause hot liquid to splash out of the top onto you.

Can a Ninja Blender Make Hot Soup from Cold Ingredients?

Unlike Vitamix and Blendtec blenders, most Ninja blenders can’t warm up soup. This is because they don’t create enough friction from their blades to heat up soup from a cold start.

This is in contrast to the more powerful models of blender that can create enough friction and heat in order to warm it up through blending alone without using any other methods such as microwaving or stove-top cooking separately beforehand.

If you want to make hot soup in a Ninja blender, you’ll need to use a heat source such as a stove-top or microwave beforehand.

Tips on Blending Hot Liquids in a Ninja Blender

Can you Blend Hot Liquids in a Ninja – Final Thoughts

The best way to blend hot liquid in a Ninja blender is by following the tips above, and by taking your time. It’s easy to become excited and rush the process, but if you’re not careful it can end up spilling or splattering.

Remember that steam will be coming out of your Ninja blender when blending hot liquids so take care while handling the container afterward until all excess heat has been released inside first.

I hope this article helps anyone interested in using their Ninja Blender to make tasty soups and sauces without having to worry about getting burned due to unexpected splashes during usage.